Walleye is particularly appreciated for its delicious taste, which makes it a highly prized catch.
This is why strict rules govern the fishing of this species, in order to ensure its sustainability.

It is easier to catch walleye in the morning or late at night because they tend to feed in the dark.
Indeed, thanks to his large eyes, he is able to feed himself at night.

In Quebec, walleye is often called walleye, because for fishermen who catch it, it’s like finding a gold nugget!
They are usually found in clear and deep water, or in stained but shallow water. It is a medium-sized fish, weighing between two and three pounds.

The most common techniques for catching this species are the use of live bait or pops, hooks or lures.

As the water warms in early summer, walleye move from spawning grounds to the central part of the lake. They are often found near a rocky structure.

The northern pike, also known as the freshwater shark, is a powerful and aggressive predator.

These fish are fighters, they give full meaning to the expression “sport fishing”! They never give up without a fight.
It is one of the most bony fish in the world, but its flesh is firm and very tasty.

Pike is a large fish that generally weighs 3 to 15 pounds. But they can weigh up to 30 pounds in Quebec!

He likes to lurk among water lilies and weeds to hunt his prey.
The best season for pike fishing is autumn but it can also be found in summer.

Lake sturgeon is an impressive fish that measures between 35 and 55 inches. Its weight varies between 11 and 77 pounds.

It’s a big fish that seems to have come straight from prehistoric times.

This is a species that lives for a very long time: some females have been counted at over 80 years of age!

Lake sturgeon are dark brown to light brown on their backs, and their bellies are paler.

This is a rare catch found in the Great Lakes and western St. Lawrence River.

It is now and since 2006, an endangered species. This is why it is mandatory to fish under release conditions.

INFORMATION ON OTHER FISH YOU WILL FIND IN OTHER LAKES

Landlocked salmon are salmon that live in freshwater lakes with shallow water and gravelly bottoms.

It is mainly found in the Saguenay Lac-Saint-Jean and Outaouais regions.

They are recognizable by their small X-shaped marks on the back and upper sides. They are 16 to 18 inches long and weigh 1 to 5 pounds. 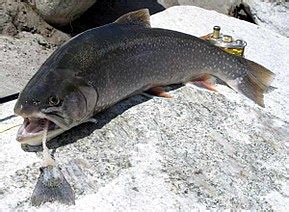 Arctic char are distributed throughout the Canadian Arctic Ocean, it is the most northern of all freshwater fish. It is also found in deep lakes.

The best time to fish them is in the fall, when they go up rivers.

He is a real fighter who will fight hard when you try to catch him.
Its colour depends on its diet and the time of year.

Arctic char is a very expensive fish because it is rare and considered a delicacy of the Far North.

The musky is the largest of the pike family. It measures 24 to 48 inches and weighs between 15 and 36 pounds!

It can be confused with northern pike but its behaviour is different, and its flesh more delicate.

It has a colour between light brown and green with silvery reflections, and stripes on the sides that can turn into spots. Sometimes, this species of pike has no marks, especially when they live in rough waters.

In Quebec, it is one of the most sought-after fish because of its size and fighting spirit.

It is mainly found in freshwater areas surrounding the Ottawa River, the St. Lawrence River and waters near Montreal.
Although musk fishing is becoming more and more popular, it is important to respect the release conditions to preserve this incredible species.

Smallmouth bass, otherwise known as bass, is highly appreciated by fishermen for its aggressiveness and fighting spirit.
This species of fish spawns in the spring. Summer is therefore the best time to fish for bass. It weighs between 1 and 6 pounds, but even the smallest ones resist!

Some people find that its taste is similar to that of walleye.

Smallmouth bass is a frequent fisherman in the St. Lawrence River.

Perch is more known for its taste than for its fishing quality. It is a species very appreciated by gourmets.

Perch fishing is available all year round, both in winter and summer.

It is a very abundant and widespread species, which plays a major role in the aquatic wildlife network.

Perch are very abundant in fresh waters without predators. It can live up to 10 years and measures 4 to 10 inches in length.

Atlantic salmon live in the ocean, but are found in rivers during the breeding season.

That’s when anglers can measure themselves against the legendary fighting spirit of this fish!

Salmon that spawn do not feed, so it is very difficult to disturb the fish enough to cause an attack. But the fight is worth it!
The largest salmon are generally found in the northern part of Quebec.

Please note that Atlantic salmon require a special fishing permit, as well as a fishing access right for salmon rivers. 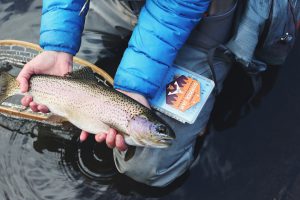 The spike, otherwise known as wendigo, is a mixture of lake trout and brook trout.

It measures between 10 and 18 inches and weighs from 1 to 3 pounds.

This species can be recognized by its tricoloured fins and its dark colour contrasted by light spots.

They usually live in shallow waters, except during feeding periods when they migrate to deeper waters.

The spike is most commonly fished with this type of bait: lures, spoons, glasses of earth, spinners and small catches. It is also an excellent catch for ice fishing enthusiasts! 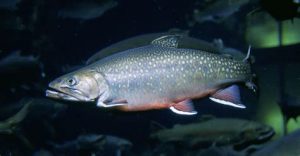 Speckled trout is one of the most popular species in Quebec.

It is a fish very appreciated by fishermen!
The speckled trout is combative and will not let itself be fooled once at the end of your cane!

This species can be found throughout Quebec and is known for its delicious taste.

Trout is an accessible fish, it is the ideal species for beginner fishermen: it is abundant and easy to catch.

It is a species native to Quebec that benefits from good management to ensure the health of their population.
It is also a sought-after fish when fishing on ice!

Its growth is slow, the trout reaches maturity late. As a result, it is highly vulnerable to overfishing.

In Quebec, trout fishing is better in the summer, because it is the time when fish pass just above the thermal line to feed.

Lake trout is easy to find if you know the right tactics. They are generally found in large numbers and of various sizes, but they can reach more than 30 pounds in Quebec!

Lake trout is a very versatile species. It is difficult to locate it. We therefore recommend that you use spoon lures to maximize your chances.